Essay: Laura Spong: It Was A Good Year 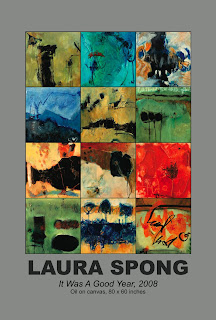 It Was A Good Year refers to 2008, when Laura Spong painted the 12 square canvases that make up this new composite painting of 80” x 60”. She painted them in similar fashion as 2007’s Good Report, Bad Report, No Report, a 100” x 80” work consisting of 25 rectangular pieces. In both cases, Spong created the individual canvases independently of each other, not considering any of the completed parts while painting the next one.

Spong didn’t decide on either painting’s final size, form and composition until all the individual canvases were completed. For both paintings, she painted more canvases than ultimately the composition required, given her extra choices as she put together the whole.

It Was A Good Year, consisting of 20” x 20” squares, turned out smaller than Good Report, which is a five-by-five grid of 20” x 16” rectangular verticals. This was not by design but the result of Spong searching for the painting in the parts. The work’s square individual canvases created a rather different dynamic than the rectangular parts of Good Report had a year ago. After exploring a five-by-four and five-by-three grid of 20 and 15 canvases respectively, Spong decided on the smaller grid of four-by-three.

Both It Was and Good Report came about because of Spong’s desire to create larger compositions than she typically does. The diminutive artist, 82 years old, comfortably handles canvases up to about 60” x 50” but wanted to go beyond that. The composite form offers that possibility.

Laura Spong (b. 1926) is among South Carolina’s most prominent non-objective painters. Among her many solo exhibitions in the past three years was a retrospective at the University of South Carolina’s McMaster Gallery. In addition to South Carolina’s State Art Collection, Spong’s work was purchased recently by the Greenville (S.C.) County Museum of Art and the South Carolina State Museum.