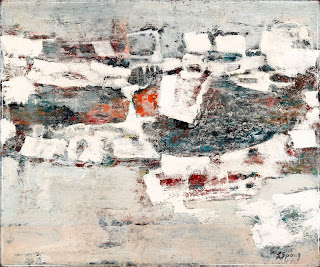 Laura Spong has made a great leap forward in popularity and acclaim, beginning with her 80th-birthday exhibition in 2006. Recent successes also have generated interest in her early work. Several early paintings were in Spong’s 2006 retrospective at the University of South Carolina’s McMaster Gallery. The South Carolina State Art Collection acquired her late 1950s painting White Flowers, along with Dancing Under The Street Light of 2003. The Greenville County (S.C.) Museum of Art earlier this year included eight of her 1950s and 1960s paintings in a group show, along with four major recent works. The museum has just acquired Spong’s 2007 painting Is It After Me Again? It hopes for an early work, too.
Among the early paintings in Greenville were City Street and Red Barns, both c. 1957, as well as Ice Floe and several untitled works from 1959-1965. The paintings, which are included in the current show, are of their time, both stylistically and in the use of lacquer on masonite and of sand and sawdust to create texture. But they also show that Spong brought considerable sophistication to her work early on.
Her use of sawdust is more than a gimmicky distraction. Ice Floe is a wonderfully appealing and accomplished abstraction suggesting representation. Red Barns is lively despite its flatness and limited pallet. Bottles, too, shows that Spong could make a flat composition with few colors sing.
Some of these paintings indicate that Spong walked the line between abstraction and representation with relative ease. Not that she walked it a lot; Spong never went through a truly representational phase. She only painted a handful of still lifes, city scenes and such. Most of them were assignments at the Columbia Museum of Art’s Richland Art School, where Spong began taking classes in the mid-1950s, especially from Gil Petroff. Bottles was painted in a class taught by local legend J. Bardin, who was somewhat taken aback by Spong’s rearrangement of the bottles he so carefully placed.
Spong is unsure what influenced her work at the time but knows she was never interested in creating representational, literal scenes. In the 1940s she had taken a few studio art and art history classes at Vanderbilt University. The real eye opener was a mid-fifties show of modern art at the Columbia Museum. Overall, her knowledge of modern art was sketchy.
Success came fast nevertheless. Spong won Columbia Artists’ Guild exhibitions in 1957 and 1961. She won an award in the Guild of South Carolina Artists’ annual show in 1960. Personal circumstances prevented her from painting and exhibiting with any frequency in the next quarter century. But the few remaining works from her early oeuvre show the promise she would fulfill decades later.
Posted by Wim Roefs at 3:03 PM