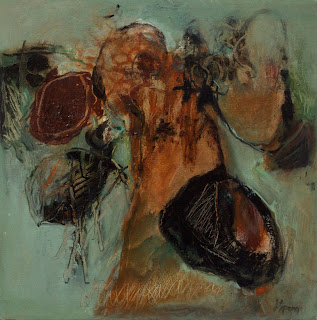 In 2006, Laura Spong had four solo exhibitions. They included a retrospective at the University of South Carolina and a wildly successful 80th-birthday exhibition that might have set a sales record for a solo show in Columbia, S.C., especially for a local artist. Helped further by her inclusion in several group shows, Spong certainly broke her own sales record for a year by a wide margin.
A well-received, 32-page catalogue accompanied her 80th-birthday exhibition. It detailed her remarkable life and career, discussed the context of that career and evaluated her art. “The other day I read the essays in the catalogue again,” Spong says, “and I had a hard time believing it was about me.” With the commercial success came critical acclaim. The South Carolina State Art Collection acquired two of Spong’s paintings, and later this year she’ll be in a group show at the Greenville (S.C.) County Museum of Art.
The acclaim has liberated Spong. For years she has painted with workman-like regularity, routinely keeping daily hours at her studio. For years she also has painted with a sense of urgency, not so much because of age but because those paintings don’t paint themselves and she gets out of sorts if she doesn’t work. To this work ethic and passion, the recent success has added new confidence, and Spong has been hitting it on all cylinders since, producing gem after gem.
“I have been inspired and energized,” says Spong. “I think the work is freer. It has a sense of letting loose, of just painting and not obsessing about every little line and dot.” The work has changed some, without losing any of the Spong imprint. While maintaining the lyrical quality of her work and the fluid lines, Spong’s paintings have become more aggressive and daring.
The breaks in the planes are sharper, the marks at times more forceful, and the scribbles more abundant and perhaps livelier. More often than before, Spong has explored an earthier, even dark pallet. More often also she has limited her pallet, even producing somewhat monochromatic paintings.
Above all, these developments suggest an increased confidence as Spong further expands her range. But, she says, sometimes they indicate her disposition. “I am not depressed, but I do feel pessimistic about the situation in the world. Still, at times I feel great hope, too. My hope comes from my faith, but when I am not in that mode, I go dark. I get into fears of the future, of losing my independence and my health, and fear about the people I love.”
“I think the paintings are more interesting,” Spong says. “I think I am getting more layers and more depth. My biggest fear has been that I would just paint a pretty piece of cloth.”
Posted by Wim Roefs at 3:18 PM