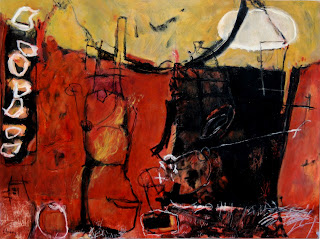 LAURA SPONG (American, b. 1926)
Laura Spong (American, b. 1926) is among South Carolina's best non-objective painters. Except for a few urban landscape scenes, still lifes and figurative paintings, mostly done as art-class assignments in the 1950s, Spong has always produced non-representational, Abstract Expressionist paintings. In the last few years, Spong has dramatically increased her reputation in her state and beyond with a series of solo exhibitions and several group shows, including a retrospective at the University of South Carolina’s McMaster Gallery. Her 80th-birthday exhibition in 2006, organized by if ART Gallery in Columbia, S.C., came with a 32-page catalogue, Laura Spong at 80: Warming the Chill Wind with Celebration. In 2007, a dozen of Spong’s paintings were in a group exhibition at the Greenville County (S.C.) Museum of Art, which bought one of her works. That same year, the South Carolina State Museum purchases two of Spong paintings, one recent and one from the 1950s In 2006, the South Carolina State Art Collection had also purchased two of her paintings, including one from the 1950s. Spong’s recent leap forward in acclaim has renewed interest in her work from the 1950s and 1960s both among private collectors and in the museum world. In 2007, if ART Gallery organized an exhibition of Spong's early works.
Posted by Wim Roefs at 6:31 PM